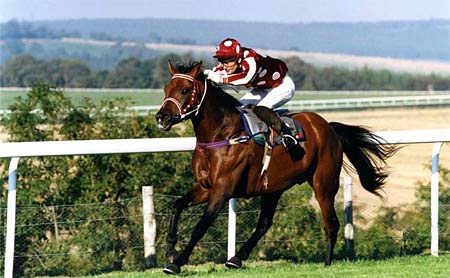 Sambist finishing eight lengths ahead of the pack for the 2nd time in his career, in his retirement race at Goodwood, with Colin Jenkins up

The legendary top racing sire 15.3 hand SAMBIST was co-owned by Anne Brown (read Anne Brown of Gadebrook Stud's obituary HERE) and her cousin Alan Brooks until SAMBIST passed away in November 2014. SAMBIST was a multiple classic winner, and retired 100% sound after 6 years with 18 wins and 16 placings... eight lengths ahead of the pack in his last race, see video below

He inherits his good looks from sire Balaton, also sire of World Champion Kubinec, and dam Stihia, also the dam of Artist (by Aswan), from top racing lines.We are indebted to HH Sheikh Abdullah al Thani of Qatar who originally bought SAMBIST from Tersk for a record sum ($385,000) after his amazing run of victories including all five of the Russian Classics. He continued to race SAMBIST very successfully in his famous maroon and white colours, both in the Middle East and Europe. 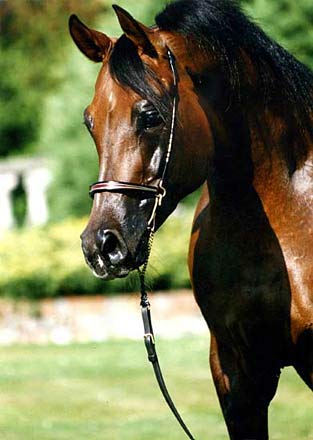 SAMBIST was world-travelled, having been born in Russia, sold at auction for a record price in Holland, brought to Britain, raced in HH Sheikh al Thani’s famous maroon and white colours in Qatar (right), Dubai and other gulf states and also in Europe finishing with a double UK long-distance championship over two miles 7 furlongs at Goodwood, eight lengths ahead of the pack.

Video of Sambist's last race, two and half miles long, at Goodwood

SAMBIST’s great grand-dam, PUSTINIA, has a double line to DENOUSTE, a forefather of the 2009 Grand National winner, MON MOME, through SALON to his great grandsire’s grandsire, and also through her grand dam TAKTIKA.