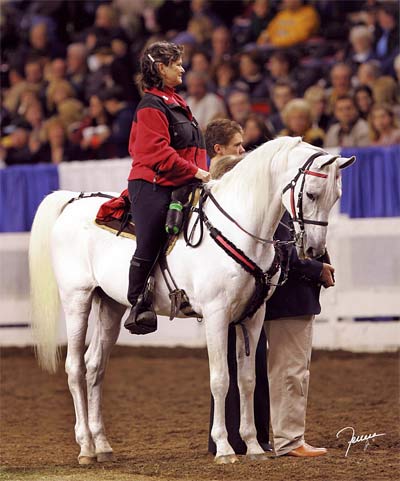 ENLARGE "Remington" and Patti at the WAHO Trophy award ceremony. "Rem" won over 550,000 other Arabians as the one who most represented the versatility and "in the family tent" spirit of the Arabian "war horse to show horse" due to his incredible record at the US NATIONALS in Kentucky. This photo represents our most precious moment in time together. "Rem" passed away 3 months later on Valentines Day

Thank you for your interest in REMINGTON STEELE*++ and his progeny. We appreciate your business and look forward to a new friendship. We hope you enjoy the information that we have put together to help you study Remington’s pedigree – he has a wonderful heritage. Each stallion in Rem’s bloodline is an Arabian Horse World “Significant Sire”… Proven producers of both halter and performance horses. Each mare is an “Aristocrat,” leading producers of champions worldwide. 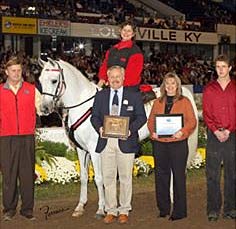 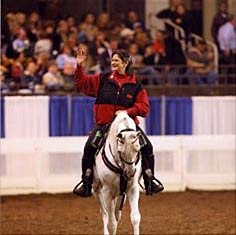 Remington Steele*++ is an ambassador for small breeders the world over – proving you CAN compete with the big guns AND WIN! From the beginning, Remington broke all the rules… Whenever they said it couldn’t be done – he did it.

Shown out of a trailer by a catch handler in Halter in his first show at age three, "Rem" trotted into the ring a big, bold, dazzling white, charismatic colt and came out show champion stallion. He has 22 first – 12 Grand Champions. U.S. and Canadian National Top Ten. Twice Scottsdale Top Ten (at four and 16 years of age). Remington is the Leading Arabian Sporthorse Stallion and has won Reserve Champion at DAHA’s first Open showing with an amateur on the lead!

At his very first show under saddle, Remington won Western Pleasure Champion with Dean Lacey as well as many firsts in Hunter Pleasure with a junior rider switching back and forth between Western and Hunt all day. In his second show, Sheri Lacey added Native Costume and "Rem" went Show Champion in THAT division while still winning in Western and Hunt, garnering High Point Horse. At his third show, the incredible "Rem" successfully carried seven riders (3 pros/4 juniors) in as many different divisions!!! 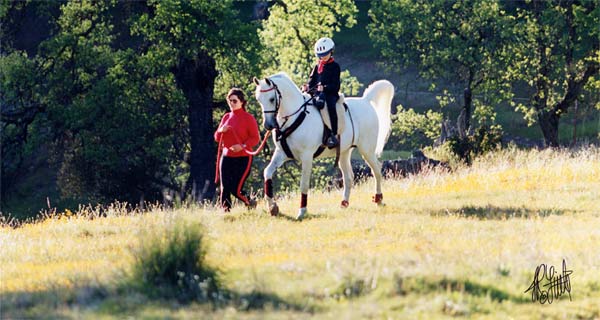 In February 1999, Remington won Top Ten in Halter at Scottsdale at the age of 16. He was competing in the Aged Stallion class against 6 year olds!

Remington, also a prepotent sire, has produced several hundred exceptional offspring stamping his personality, showmanship and versatility onto each of his babies as well as strong correct legs, and long neck, strong level him, short back.

If you want to breed the kind of horse you can show one weekend, trail ride the next, and trust with your kids-then REMINGTON STEELE*++ and his progeny are just such horses!

SOME OF "REM"S OUTSTANDING ACCOMPLISHMENTS: 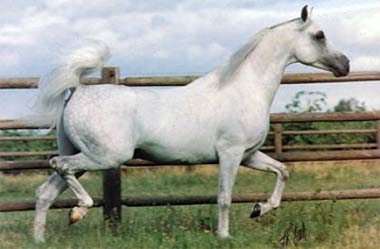 - US and Canadian National Top-Ten Halter stallion in 1987

- Over 200 progeny (pure bred and half Arabians) competing worldwide in the show ring, Competitive Trail, and 50 and 100-mile Endurance rides, and Search and Rescue, etc

REM was the gift of a lifetime... I miss him so much... he was not only a great horse but "an OLD SOUL"... he did so much else besides show ring and Tevis... saved me from a mountain lion attack... helped countless teenagers, veterans and homeless people get their lives straightened out...helped mentally and physically handicapped children and many of his offspring do now too... he was such an ambassador for the breed and all of the equine world... thank you all for being Remington Steele *++ fans, for sharing a piece of his life, and for all of your wonderful comments...I guess I should write a book about his life... it has been so very hard to go on with out him. We shall meet again, Rem!
- Patti