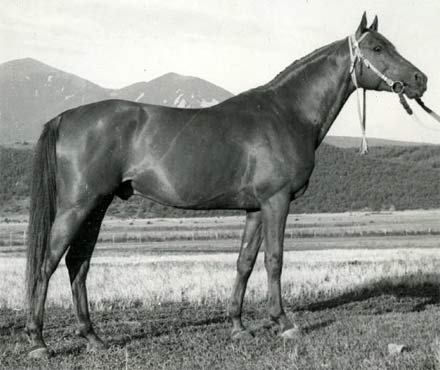 PRIBOJ is considered a "genetic freak", legendary the world over as the best producer of athletes... You can see why from his confirmation here which he passed on consistently over numerous generations

Priboj, born 1994, was bred by Tersk Stud in Russia. He was a chestnut stallion - and a Tersk legend.

Priboj was a masterful blend of the best Polish and Crabbet bloodlines of the era, making him the most significant stallion ever to emerge from the Kohelian Adjuze sire line in Europe. He was described by Russian Arabian authority O. Balakszyn as "Tall with correct conformation, and long, well arched neck, superlatively large, strong, clean joints and substantial, clean legs of dry, solid constitution. He was a brilliant track runner, winning several Classic Stakes races and setting the speed record for purebred Arabians at 2400m."

During his 11 year stud career at Tersk, Priboj enjoyed senior stallion status, siring over 200 foals. Twenty-five of his sons found use in Russian Anglo-Arabian breeding programs based on outstanding conformation and athletic ability - four of his sons were used with success in the purebred breeding program.

Over twenty-five daughters were incorporated into the Russian breeding program and were valued as broodmatrons of the highest possible caliber. Unchallenged now for almost a century, Priboj is the single most influential sire of racing champions in the Arabian breed. The legacy of Priboj is that of a superior equine athlete - ideal conformation, abundant substance and strength, harmoniously functional proportion, enduring stamina and tenacity and incredible versatile athletic prowess.